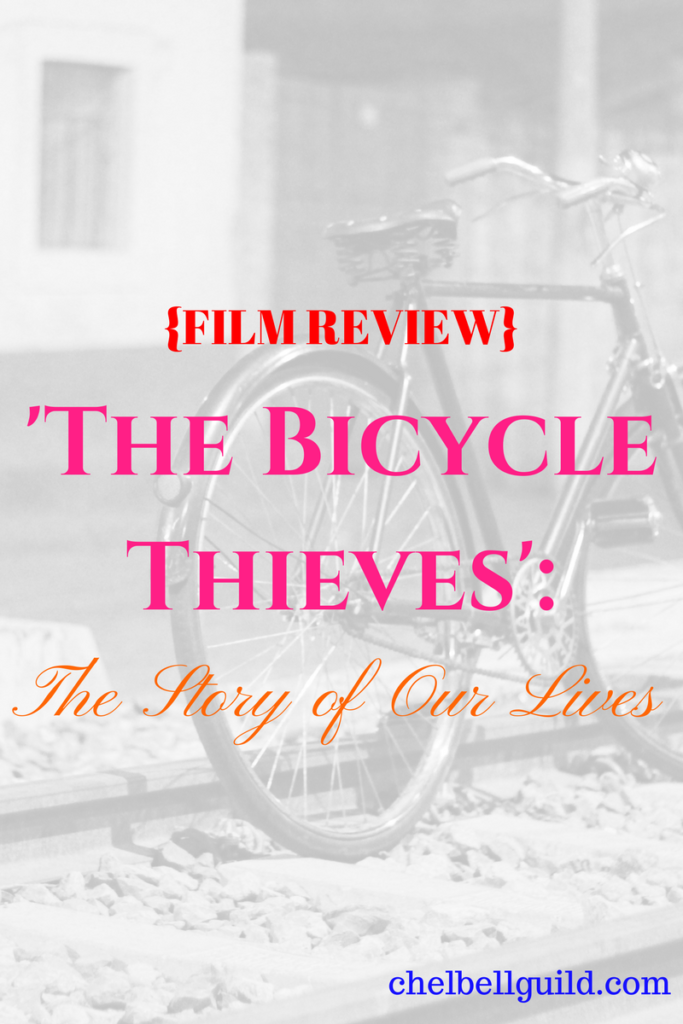 Neorealist films exhibit “art imitating life” and not the opposite. In this style, a director uses his artistic vision to comment on the world in which we live. The story may seem simplistic and mundane to the naked eye, but the deeper message is a reality we must come to terms with. Vittorio De Sica does just this with his masterpiece, The Bicycle Thieves. In this film, De Sica uses specific cinematic techniques to portray a Neorealist world, our world, to the audience. The Bicycle Thieves artfully portrays not one protagonist, rather a microcosm of humanity struggling with both good and evil in an attempt to survive.

Most films present a world that takes the audience away from the problems of real life. With Neorealist films, the problems are on display and story lines revolve around typical circumstances. However, within these average plots are hidden the challenges that humankind faces. Neorealist films are known for calling attention to unjust social structures that threaten to erode human values and take away basic needs: food, shelter, family, work, love, sex, honor, etc. (Kawin, pg.379). The Bicycle Thieves is no exception.

De Sica speaks to the audience with the camera more than with the lines out of the actors’ mouths. He shot the film on location in all but one scene, frequently using long shots to promote life as the viewer would truly see it. The opening sequence reveals the area of Italy the story is set in, allowing one to quickly see the dilapidated buildings and vast terrain one is to become familiar with. As the camera shows the family selling their sheets, it makes sure to display the towering warehouse of pawned goods. Later, during the search in the rain, the open market area is shot from wall to wall and ground to sky, displaying all that the viewer would see if performing her own search. Again, in the church, the audience is shown the entire room full of homeless patrons. At the climax of the father and son’s relationship issues, one sees the boy at the top of the stone steps in the immense tourist area, with people coming and going. Frequently, De Sica exposes landscape to add to the story what cannot or does not need to be said.

The importance of natural lighting cannot be forgotten in this film. What is the significance of shooting outside of a manmade set without each location’s respective lighting? During the heat of the day, the audience can feel the dusty landscape. When inside the low-income apartments, the viewer sees the poorly lit rooms as the characters do. Walking on the east side of a building during the afternoon would certainly cast shadows, so there is no attempt made to make this otherwise. When crowds of people are shown, the faces are not brightly lit. Night time scenes show deep, darkness. The scene in the rain demonstrates an uncomfortable sogginess one can feel as the colors are a bit greyer while simultaneously reflective and blinding, as daytime rain can be.

De Sica also sought out average people to play his characters. Not only were the individuals non-actors, they were also working class. This combined with the on-location shooting and natural lighting added to the rawness of the film. The Bicycle Thieves was shot in the exact opposite format of a polished, Hollywood movie, giving the audience no vacation from the real world. In further pursuit of truth, Cesare Zavattini, who wrote the film, went with De Sica to brothels and rooms of the Wise Woman to find inspiration as close to post-war life as possible, in the time when Italy was paralyzed by poverty (Ebert, paragraph 3).

The lead character, Antonio, represents Everyman in a way that the audience can identify with. The cinematic elements certainly encourage this, but also the simplicity of the plot: a man down on his luck, trying to work and provide for his family in a struggling economy. He loses something necessary through a criminal act by a careless, young man struggling himself. Suddenly, the audience follows Antonio as they are forced to ask themselves, “What would I do in the same situation?” In a climate where perhaps the belief is “God helps those who help themselves”, Antonio has no assistance, other than that of his loyal son, Bruno. Despite the mistakes made, the viewer is taught that family may be all one has and even that is fleeting, as one is reminded with the near-drowning of the young boy.

The Bicycle Thieves suggests that the working class is pigeon-holed in a cycle, never to get ahead. One can look at life optimistically or pessimistically (example: one can search aimlessly or stop and enjoy lunch today), but the moral degradation of society is part of the territory when basic needs are not being met. A further question presented is one of “What is moral degradation?” Antonio tries to make the right call, but occasionally falters. In the end he repeats the offense committed against him; is crime contagious? Is it a domino effect? Did the original criminal have a similar story line to Antonio’s before the film began? There is no clear answer presented as the film ends with only the slightest redemption: Antonio is still in a bad position, but at least someone had mercy on him. Sometimes bygones have to be bygones. Morals might just be a barometer or sliding scale within all of humanity; one may only see this when the need arises, when one is tested.

The Bicycle Thieves shows the value of a story in context. Without knowing the context of the original criminal, one has sorrow for Antonio and contempt for the “other”. This simplistic story of a man’s quest to obtain what was stolen from him becomes a commentary on “us” and “them”. The lesson of the movie can be applied to the tales told on the even news: how does one perceive a local robbery, a bombing, a war, a genocide? Who is the “other”; could it ever be synonymous with “me”? De Sica and his fellow Neorealist directors successfully raised these timeless questions.

With the camera as his medium, De Sica artfully presented a social commentary on not only working class struggles in a time of economic uncertainty but the battle between good and evil in all of humanity. He used Neorealist concepts to bring this life, choosing to shoot on location as much as possible, using long shots to tell a story without words, utilizing natural lighting and casting nonprofessional actors. Zavattini and De Sica did their research to portray the hardship of life after war in Italy, which was not dissimilar to many regions at the time. The Bicycle Thieves tells a simple, sad, story to encourage deeper conversation about the tragedies of society and a questioning of what one believes to be absolutes.