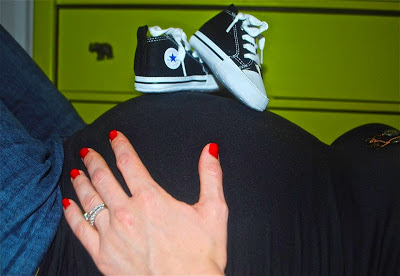 Sure, I can share with you what happened when I went into labor and then delivered my son. From that, you can prepare yourself for what might happen during your labor, IF you use the same hospital and doctors, but countless things I read and were told did not happen to me.

I am the rare human being who learns from others’ mistakes. Though I ultimately roll with the punches, I take in as much information as I can in advance. When it came to labor and delivery, I approached the frightening but inevitable event in the same way. I listened to my friends’ and family members’ experiences, particularly if they had a baby in the last decade as things have changed. I logged onto whattoexpect.com, which I found mostly helpful, and occasionally would come across blogs or articles from well-meaning women who wanted to prepare all pregos for the surprising things that would happen in the hospital that no one had warned them about.

Below, I’ll tell you a little bit about my experience, but I’ll also tell you that your story may be nothing like mine. (And if you’re afraid of TMI, exit the room now.) 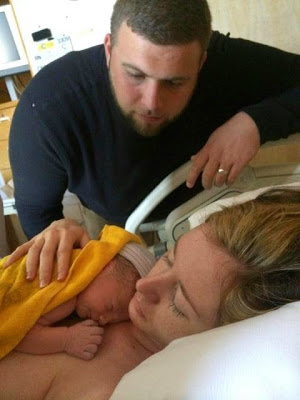 Some say they feel like you need to have a bowel movement, but I just felt intense menstrual cramps. (At no point did I feel like I had to poop.) My contractions started at 10-ish at night and increasingly grew stronger until my epidural around 3 or 4 a.m. The only position that provided me with any shred of relief when they were at their height, was a squatting position or bent forward position, as I felt a lot of pain in my lower back. No, I was not screaming as they show in the movies. In the hospital, when I thought I would cry, I felt myself snap back into the present moment when my husband would tell me to breathe, without us ever having rehearsed what he would say. He would look at me and just know I was holding my breath and getting lost in the contraction. Breathing really does help. Thank you, yoga!

A flood’s a comin’…or not
Only 10% of women experience their water breaking. There’s no reason to fear a gallon of fluid gushing out of you while you’re at the grocery store, because the odds are against you. Mine broke while the nurse was examining me, so the doctor didn’t have to break it for me. (I hear that is unpleasant.) And no, I didn’t soak the bed.


Dilating: What’s in a centimeter?
I was dilated to 3 centimeters in the last month of my pregnancy, before ever going into labor, so I had a bit of a head start. This isn’t uncommon. I was 5 centimeters at the hospital when I checked in. It was between 5 and 7 that I had my epidural, and things progressed steadily after that. Once I reached 10 centimeters, the nurse told me that it can take a while for first-time babies to come out, despite being fully dilated and effaced, and that it didn’t matter whether I pushed or relaxed, the baby would come when he was ready. 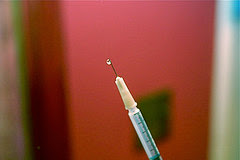 I was told SO MANY horror stories about epidurals, and yes, the video you have to watch before receiving one is nerve-racking (it is a major procedure, after all). However, statistically speaking, most women live to tell the tale. Though there can be complications when someone is shoving a needle into your spine, my epidural was a godsend. I felt immediate pain relief and was able to get some sleep. I felt NO pain during the actual delivery. I had heard that the epidural can “run out” before the main event, and while there is a button allowing you to give yourself more of the medication during labor, I never felt the need to push it. Maybe I had a really good anesthesiologist…?

Push it real good
I pushed in sets of three for an hour before my son was born, but it only felt like 10 minutes. I had no idea if what I was doing was right, I just visualized pushing all of my energy downward. (Again, thank you, yoga, meditation and theater classes that emphasized breath awareness.) I had a nurse supporting my neck and shoulders, my husband holding one leg, one of my sisters hold the other and the doctor down on the end. Between them all, I had feedback when I was making progress and before I knew it, the doctor was telling me to reach down and feel the baby’s head and hair! (She spiked his hair into a mohawk while we were waiting for his arrival, and to this day, he has spiky hair.) The delivery room was very laid back. In between contractions (when you push), we were all having a conversation. True, I had EVERYTHING out on display, under a giant spotlight, but to listen in, it sounded like we were chatting over coffee. Side note: I actually felt a lot of pressure in my face while pushing, when everyone had told me I would feel pressure down below.

Not everyone poops on the table.
I was told the opposite, and that if you poop while pushing, you’re using the right muscles. Well, I don’t know how I didn’t, but I didn’t. (Though I wouldn’t have felt it at that point, or cared, if I did.)

Stitchy situations
Those in the episiotomy camp will tell you it’s better to plan a clean cut than to tear, while others will say the procedure may be unnecessary and may cause complications. Well, I tore internally, but it was no big deal. I was stitched up in no time and I can’t even see any signs of the injury! I also hardly felt anything during the recovery process. I trusted my doctor and my doula (my sister, Stephany) to have my back- er, uh, my vagina. 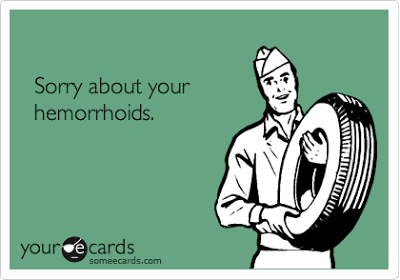 What women really WON’T tell you
You will most likely get hemorrhoids. Of all the graphic and awful things you will hear about having a baby, this subject is one that no woman wants to admit to. Every woman I asked got them to some extent. I knew it was a possible outcome, but I had no idea that they would hurt worse than any other part of my recovery.

Baby diapers ain’t just for babies
I was told in advance about taking a baby diaper, putting water on it and freezing it to use as an ice pack during recovery. At the hospital where I delivered, it’s standard procedure to give them out to recovering mamas. These are used because that region of the body will actually be swollen and bruised after the birth, which I hadn’t expected, but makes complete sense. 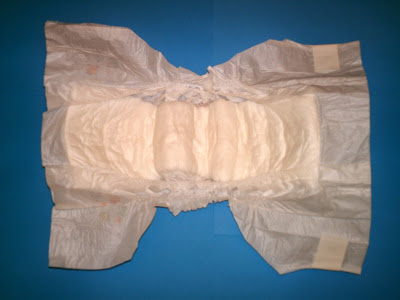 My hospital was very good about giving me all of the supplies I would need to comfortably go to the bathroom and care for myself afterward, and the nurses explained and demonstrated each item’s use. I have heard that some women are left stranded, having to either bring the items themselves or figure out what each one is for. (And by the way, no, I did not feel like I was going to rip open while going to the bathroom for the first time post-delivery. Nothing felt like it was on fire either…)

No pain, no gain?
I’m not going to be so vain as to say that I have a higher pain tolerance than most women (After all, I didn’t handle pregnancy very well.), but I think the entire experience partially comes down to this simple fact. If you have been through surgeries or illnesses before, and are having a fairly routine delivery, it may be easier for you to manage. In my case, I only took Motrin afterward, though I was offered Percocet. First of all, I was not in agony, and second, why take something that might leave you nauseous and constipated while healing and dealing with a newborn?

Night time…is not the right time

The first night was hard. Actually, the first two weeks’ worth of night times were hard, but in the hospital, you expect more help. The staff wants you to get used to dealing with the baby, and apparently, wants you to know they are NOT your babysitters, so they graciously took my son for two hours during each night so that I could sleep, but that was it! My husband was there to help me, but I can’t imagine what single moms would do. A big reason it was so hard was that, despite taking a breastfeeding class in advance, I was NOT told how painful it would be or that the baby would essentially want to latch on and off my bruised and sore nipples every 5 minutes, which is not an exaggeration. The class warned me about babies who don’t latch correctly, and claimed “breastfeeding, when done properly, doesn’t hurt.” That’s an out and out lie. That is simply not the case for all mothers and we shouldn’t feel shamed if we’re in too much pain to continue. But that is another blog post.

The hospital had lactation consultants on staff during the day, but no one to coach new moms in the middle of the night, when tired and recovering mothers need help the most. When my baby was screaming from hunger, or perhaps, just wanting to suck for comfort, the nurses never told me a pacifier or formula were viable options. They simply latched him onto my breast and left the room, though I never had any issues latching him on by myself. For me, this was harder than any aspect of labor, delivery or recovery.

Hidden paperwork
I was given a lot of paperwork at the hospital, once I was in a room of my own. I never had a chance to read any of it until I got home, and the staff didn’t go over any of it with me. It was as if they fully understand how overwhelmed the new parents will be, so they give them information to read later. Well, some of the paperwork needed to be read IN the hospital. There were instructions for me, for the baby and even a flyer explaining a celebratory menu option for my husband and I, that we could order separately (surf and turf, desert, the works). I would suggest designating a friend or family member, who is not sleep deprived, to read the paperwork for you and give you a heads up if there is anything you should know before you leave the hospital. 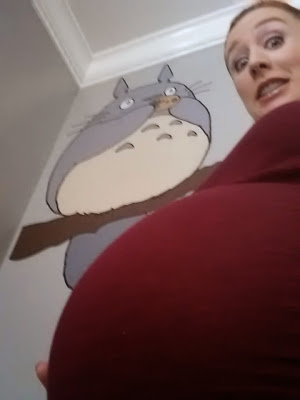 Not so picture-ready
There will be lots of photos taken. Once upon a time, they were taken for a person’s baby book or private family album, but today they’re shared all over social media. You will not be camera-ready. At all. Not even a couple of days in. In my case, not even a couple of weeks in! Some ridiculous online sources suggested bringing makeup and beauty products to the hospital. That was the last thing on my mind while I was there. If I happened to get a moment for a nap, why would I want to smear makeup all over the place? I was in a zombie-like trance for probably the first month.

As for the baby getting professional photos taken at the hospital, he was not having it. He had stimulation overload and just wanted to crawl back inside of me! Leaving him on an angelic, white sheet to pose ever-so-perfectly was a joke. He was screaming and bright red. He just wanted to be held. You’ll get plenty of pictures on your cell phone, trust me.

To conclude, know that you can only prepare so much. Also know that unless you have an unusual circumstance, delivering a baby isn’t half as bad as you’ve been told.