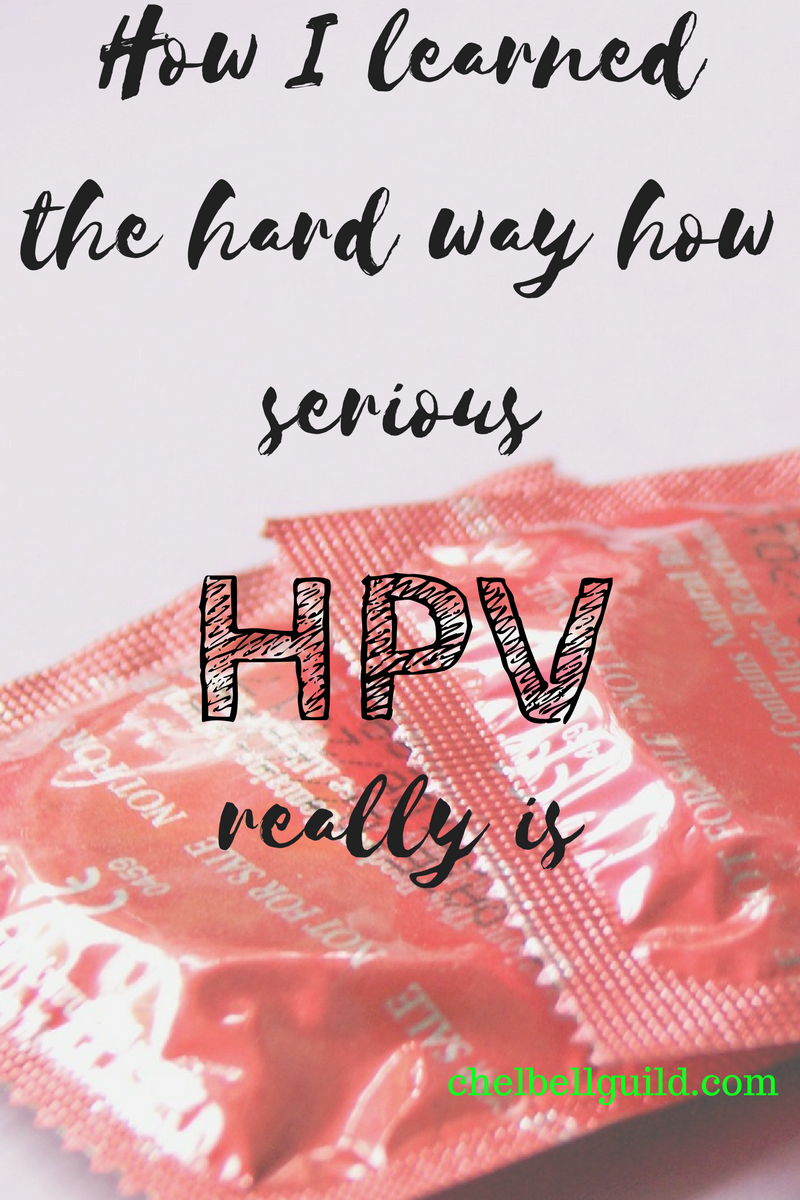 I’ve spent years debating how to broach this topic, since I knew there would be backlash, misunderstandings and judgments against me, but I always knew the conversation had to happen, because if I had this information long ago, I never would have been infected. The best way to do it, is probably to tell you my story.

Why is it that the only time we hear or read about HPV is when a comedienne jokes about her sex life or a conspiracy-theory-loving mom spouts off about the pseudo dangers of the vaccine? Why weren’t we warned about this monster back in health class? You know, the class where the emphasis seemed solely on HIV? Let’s look at the numbers: According to the CDC, 79 million Americans are currently infected with HPV, while 1.2 million Americans are currently infected with HIV. Of course, HPV can go away on its own and this is comparing apples and oranges, so I’m not getting into a pissing contest regarding these two very shitty viruses, but I want to know why exactly the massive epidemic of HPV is being ignored.

In case you’re the type to skim a blog post, let me give you some important bullet points off the bat:

I found out that I have HPV through a routine pap smear years ago. I just so happened to be trying to get pregnant when I learned that I had lesions on my cervix that would likely lead to cancer, if left untreated (lesions that were completely painless and invisible to me, so skipping my pap smear would have left them undetected until it was too late).

I had always assumed I was in the clear because my annual paps came back normal, but a pap is not the same as an HPV test. A pap will tell you that you have the virus, once it has already done damage and is starting to show up in the form of abnormal paps. Why aren’t we told this and offered an HPV test at the time of our pap?! Every time I had an STD workup, I wrongly assumed that covered anything I would have to worry about, so I dutifully was tested regularly, even getting blood tests, when I knew there was zero percent chance I had been infected with HIV.

So my plans to conceive were put on hold after further in-office testing revealed I needed an invasive surgical procedure. You can read all the details of what’s involved in a LEEP here. After healing, I became pregnant without issue, but the virus wasn’t done with me. If a woman has ever had surgery on her cervix, she needs to be monitored monthly during pregnancy for changes in the cervix that could lead to a miscarriage. My husband and I were on edge, worrying that our perfectly healthy baby could be in danger because of my faulty cervix. But my cervix didn’t fail me and all was well. My doctor told me that vaginal childbirth acts as another surgery, so-to-speak, shedding any additional problematic surface cells. Since I know someone who has had a LEEP and two children and has never had to worry about her HPV diagnosis ever again, I figured it was behind me. Wrong!

A year and a half after giving birth, and two normal paps later, a red flag appeared. (After having surgery, a patient has to receive 6 normal pap smears for the virus to be considered in remission.) Neither my doctor nor myself were expecting anything negative to pop up, but when I went in for my test results, she handed me tissues before explaining what I would be facing. It took me a minute to realize what they were for as she slowly started reading my results to me, circling words on the page and showing me, making eye contact with every other sentence. The lab technicians found cells suspicious for adenocarcinoma in situ. While completely different from the lesions previously found, there is nothing I could have done to prevent this diagnosis. HPV does whatever it wants to do, whenever it wants to do it, which is why it’s so important not to get it in the first place. While sex will increase your odds, sex with multiple partners will not, as long as you wear protection. That’s the name of the game here…that, and getting vaccinated.

OK. Now what? The next step would be another round of surgeries. Four at once to be exact: another LEEP, a D and C, ECC and hysteroscopy. I want to pause to say that as far as surgeries go, barring nothing extreme happens, these are pretty mild. Yes, I was put under general anesthesia and now owe thousands more to my local surgery center, but it was a same day procedure and relatively painless. Having said this, I hope neither you nor my daughter have to go through these surgeries as a regular part of life, akin to dental work or a visit to an ophthalmologist. In this case, it was working out the childcare in advance, having family come help me pack up my house in the middle of a cross-country move, and waiting for the possibly life-changing results that were the hardest parts. (On top of this, my mother was diagnosed with brain and lung cancer, which she is currently, and rather successfully, battling.) It was a stressful period, but thankfully, somewhere in Tennessee (or was it Kentucky?) my doctor called to tell me each and every biopsy she took came back normal. Everything looked picture perfect and therefore, during all of those weeks of fearing the worst, we were dealing with nothing but a false positive. The new doctor I’ve now established with in my current city confirmed my health and continues to monitor me.

While I’m incredibly grateful for my non-diagnosis and am optimistic, I also feel like this HPV is a ticking time bomb, now more so than ever. If it wants to go off, it will, but who knows when? But I could also die in a car crash, so we can’t dwell on the way we’ll go out, right? The fact that adenocarcinoma in situ was even possible 6 months after a normal pap is terrifying.

The American Cancer Society now recommends women wait between 3 and 5 years in between paps. They claim this is because changes that lead to cervical cancer happen slowly, over 10 to 20 years. While I have not had cervical cancer, I’m living proof that yearly tests are incredibly necessary. One year, I had a normal pap and the next, it was abnormal with atypical squamous cells. Had I waited three years for another pap, how far advanced would they have been? Most insurance companies will include one wellness visit per year, and facilities like Planned Parenthood and state health departments can provide tests on a sliding scale for those with financial restrictions. There is simply no reason to skip it.

Regarding your concerns about the vaccine, I was once in your shoes. Years ago, a doctor with poor bedside manner scolded me, in front of my daughter, for not opting in on the vaccine. Speaking to me in private was the least he could have done. Instead of explaining the dangers of HPV and the facts behind Gardasil, he made me feel like I was neglecting my child, when I thought I was saving her from being a guinea pig. It’s doctors like him combined with misinformation online that are sentencing our daughters to a life of surgeries, pregnancy complications, and in some cases, cancer (and need I say, death). You’d better believe my daughter has since been fully vaccinated, and my son will be, too. Men are the silent carriers of this virus, and if I wouldn’t stand for my son hurting a woman in any other way, why would I tolerate this?

Sorry to be a downer with this super long post about reproductive organ funk, but taboos aren’t worth dying over. Spread the word, not the virus.