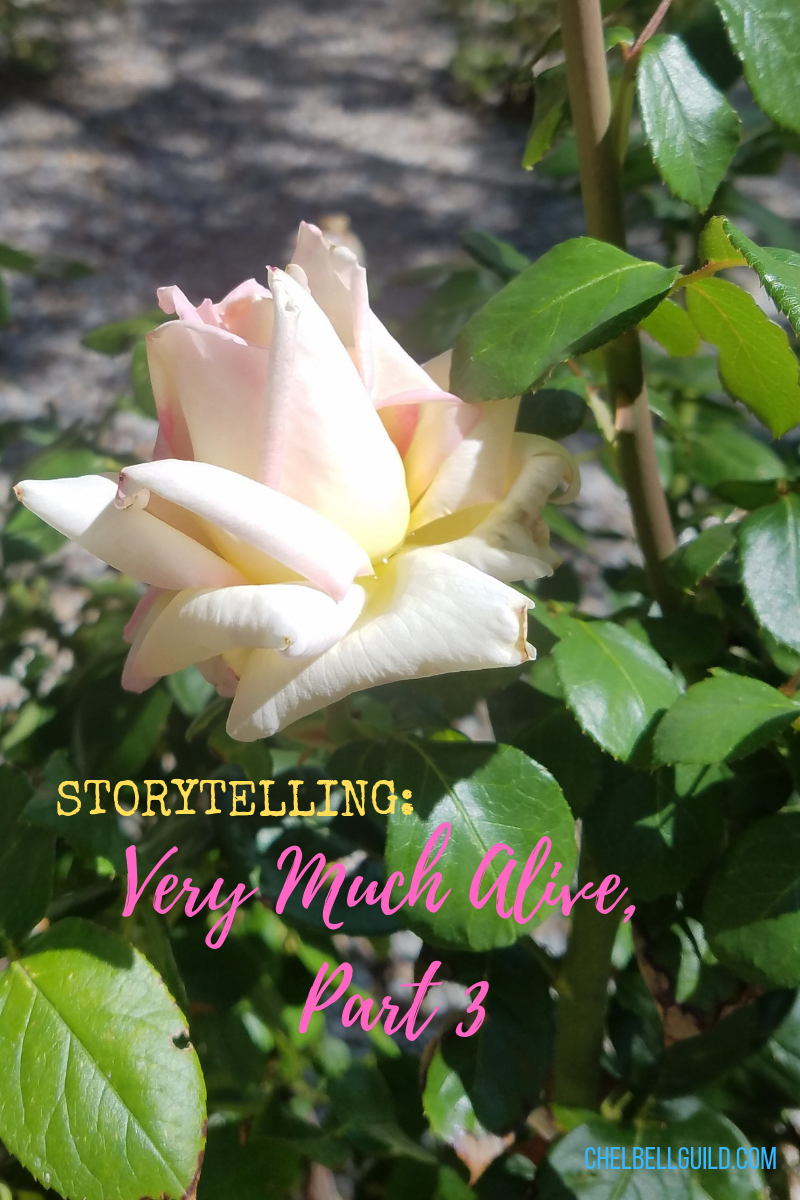 This post is part of a series of journal entries written throughout my mother’s two-and-a-half-year battle with cancer. You can read part 1 here, and part 2 here.

Two and a half years had passed since my mother’s diagnosis, and a whirlwind of other life events had transpired in that time. By then, I had moved to South Florida and many areas of my life were better than I ever imagined possible. I felt worthy, loved, successful, thriving, and happy. But bliss was tempered by anticipatory grief, a torturous time bomb set to explode at an unknown point in the future…that I had been staring at for 913 days straight.

After treatments stopped working, my mom was put on in-home hospice care. While she was clearly getting sicker, we all wondered if this step was a little premature. She still didn’t seem like she was on death’s doorstep. In a matter of weeks, though, she started rapidly declining. It became difficult for her to speak; there were many more falls and 911 calls; and simple activities like bathing and picking something pre-made out of the fridge to eat took too much energy for her to muster. Eventually, she stopped taking joyrides up to the drugstore, much to our relief. She was becoming more dependent on other people, and was soon relegated to a bed. It was no longer safe for her to be left home alone, and the nurses didn’t come often enough, so my mother actually asked to go to a nursing home. After the whole family debated the idea, and finally got her into a facility, it was as if she had no recollection of bringing up the topic at all. At home, she had said many times that she was “sick of it all” and asked her nurse when she was going to die. In the nursing home, however, she said she wanted to go home.

By the time I flew out to see my mom, there wasn’t much left to physically do. It was my oldest sister who had spent the summer changing diapers, administering medications, lifting my mother into a wheelchair so she could go outside and back into bed again afterward, all while my sister worked a full-time job. When I got there, my mom was as comfortably settled into her new home as she could be, and the nurses took care of these tasks. 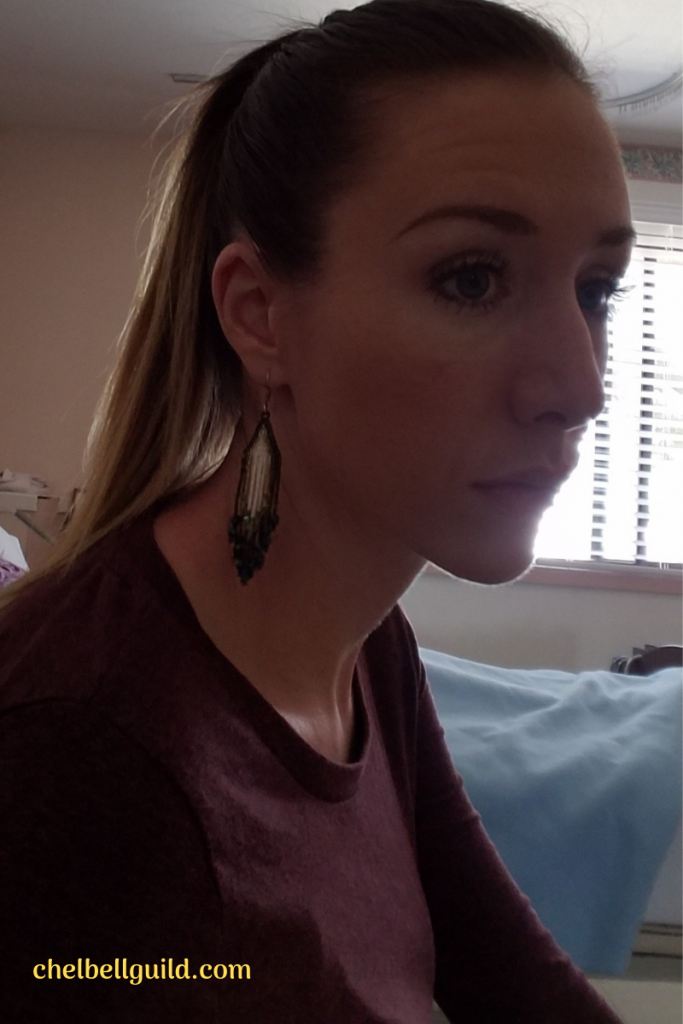 Leading up to my trip out West, I was scared and stressed. Processing everything mother-related was a weighted backpack I wore at all times, but I was also dealing with the minutiae involved in a cross-country move and selling a problematic house from 1,300 miles away. I tried to focus solely on the trip, and to do so, I had to make childcare accommodations for my son; charge yet another airplane ticket and rental car on a credit card; and fly through a tropical storm which, rather prophetically, turned out to be nothing.

I say prophetically because my fears were unfounded. Mom was in much better condition than I had anticipated when I got there. She was not a vacant shell of a person, existing in a medicated haze. And the longer I stayed, the more her mental health seemed to improve. Only once did she ask who I was, and that was early in my visit. She seemed happy to see me each time after that, even asking specific questions about my husband and son. By this point, her meds were regulated, her meals were provided on a schedule, and while there were times that she was confused, she no longer mentioned “going home.”

{AN IMPORTANT ASIDE FOR THOSE IN A SIMILAR SITUATION}

The nursing home was short-staffed and fraught with miscommunication. If I entered my mom’s room after a meal had been served, it would either still be sitting completely intact on the tray in front of her, or she would have spilled whatever she attempted to eat or drink all over her reclined chest. It wasn’t that she didn’t have an appetite, rather that she had limited mobility and a minor task like feeding herself had become a major challenge. Instead of this reality, the report would be that she just “wasn’t eating.” It was frustrating that the staff didn’t think to at least prop her up, but they were overworked and underpaid, or so assumed. I buttered everyone up as much as possible, bringing coffee and donuts, and using my manners when I really wanted to say, “Is this what you want YOUR final days to look like?” No one thinks they will find themselves in this situation.

It was clear that hospice, which was made up of a team of nurses, caseworkers and volunteers who dropped in once a day, rarely communicated with the nursing home. They were two very separate entities, and the only way to make sure that everyone was actually doing what they said they would was to physically be there and act as the patient’s advocate. I can’t imagine what the experience is like for people who go through the process of dying in a nursing home alone. (And for those with family members, there’s no support for the bereaved once the patient is gone. Thank you, next.) 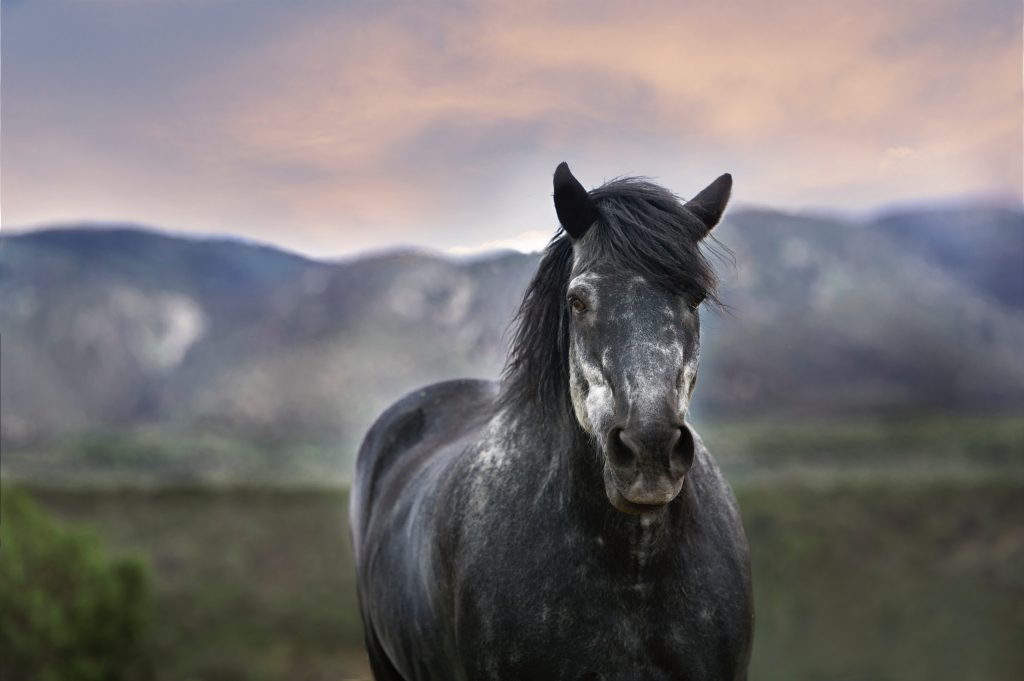 Mostly, all that was left for me to do was what I did best, and that was to entertain her. I started by decorating her very sterile room. The hospice patients got the old, beat up furniture, since they wouldn’t be around long to appreciate the upgrades (my observation), and if a patient or her family members didn’t bring in items from home, the space was quite depressing. I brought in items that had been staples in our homes no matter where we lived (tapestries, pottery, photos), and a few cheery store-bought items for her to look at (a sparkly, purple, mermaid balloon; autumn garland and window clings). I sat next to her, cutting out pictures from New Mexico tourism magazines I’d collected from the airport, and used sticky tack to create a collage of western imagery on her wall. I wanted her to see the mountains, horses, and Native American art she had moved there to see in the first place. (We thought she might be there longer, but a short week later, my brother-in-law had the task of taking it all down.)

She started requesting Pay Day candy bars, something I had never seen her eat before, so I would bring her one every day and made sure she was stocked up when I left. Watching your dying parent enjoy life’s simple pleasures sparks a similar joy as witnessing your toddler’s reaction to his first bite of ice cream or first butterfly sighting. It reminds us that in the end, the “big” things don’t really matter.

I bought purple, glitter nail polish and painted her nails. (When I was growing up, she always had a fabulous nail polish collection.) She seemed to instinctively hold my hand as I did so, not that we came from a touchy-feely family. Her nails were still perfectly polished on the day that she died.

I would walk her outside each day to the sad little courtyard, past the cage full of parakeets in the lobby. My mom instilled a deep love of animals within me. The one pet she said she would never have was a bird because she didn’t feel they should be caged. She did have one as a kid though, so we would happily talk about how it had survived my grandmother sucking it up the vacuum cleaner, even though I’d heard the story dozens of times before. Once in the courtyard, I’d use her floral shawls to dress us up as the characters from Grey Gardens and take selfies. 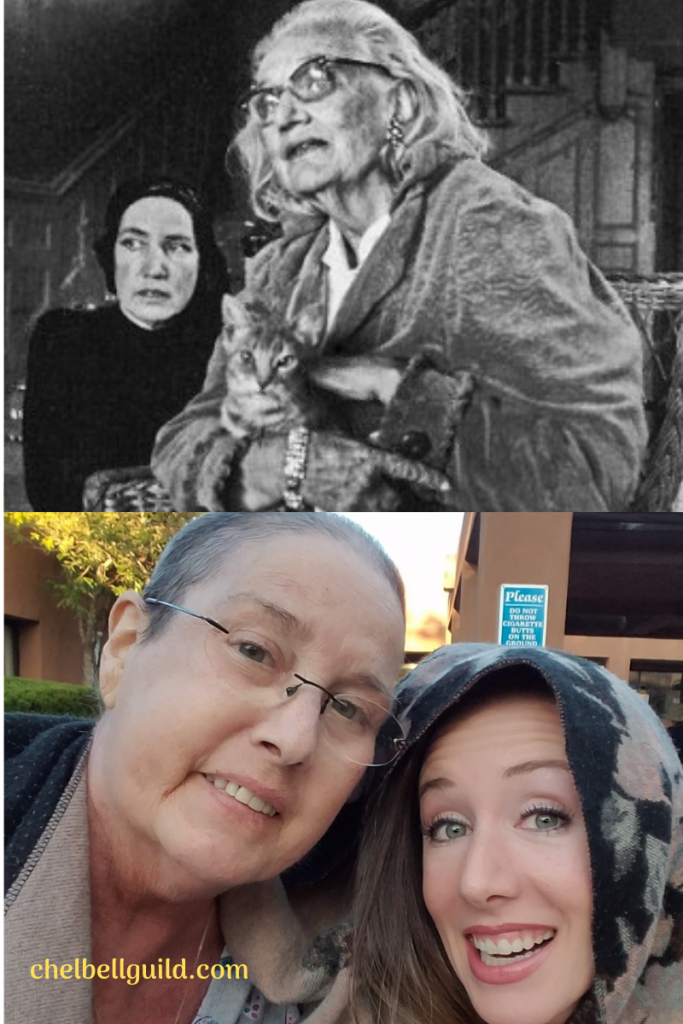 I arranged for a service dog to visit her, but his owner and I carefully crafted a plan to pretend we knew each other from before so that my mom wouldn’t feel like a charity case. (As fate would have it, Patty and I had lived very similar lives and did become friends.) Mom lit up when she saw the dog, and Patty chatted with her about their mutual love of Jim Morrison. She pulled up a video on her cell phone of Jim performing and my mom happily sang along. “Try to set the night on fiiirrrreee!”

I engaged my mother with inside jokes and commentary, particularly when I realized her anxiety was getting the best of her. She had become so vulnerable and transparent to me. When perhaps everyone else thought she was being difficult, I saw a scared little girl. I quickly realized that preemptively assuaging her fears would go a long way. For example, warning her that we were about to roll over a bump while quoting Rain Man (“I’m an excellent driver.”) when pushing her in the wheel chair, kept her from letting out an audible, scared, gasp-and-groan. She would also get frustrated that people thought she was mindlessly mumbling into space when in reality, she was trying to say something valid. I would translate for her at every chance I could. I hated the thought of leaving her because I knew she would go back to being seen as a babbling, mindless, difficult patient and just another number. 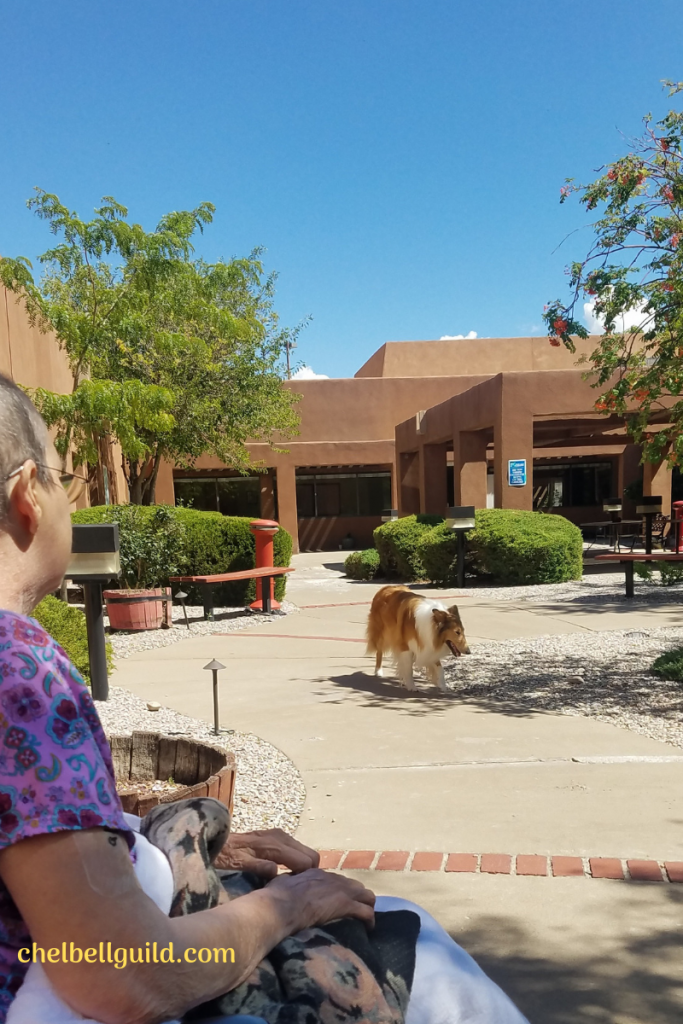 When I finally said goodbye to my mom, it was the only time in years that she didn’t cry at our separation, though it would have been appropriate since it was the last time I would ever see her. It was evening and she had received her morphine for the night, so it was only a matter of time before she would fall asleep. Because she would wake up throughout the night, I always left her with something decent on TV. This evening, I stumbled upon Mermaids; a movie that we had always said summarized our life too well. (Mom even bore a resemblance to Cher in the 80’s.) I didn’t want to leave her feeling nostalgic, regretful, or acutely aware of her mortality, so I sat a while with her, careful not to look at her for fear I would start crying or make her upset. After 15 minutes, I looked over, and just like the non-issue tropical storm I had been terrified to fly into, she was fast asleep. I quietly got up to leave and she awoke. I went over to give her a hug goodnight, but this time, I laid my head on her chest, taking the opportunity to do something I hadn’t done since I was a very small child and knowing I would never have the chance to do it again. There would be no dissolving into an emotional mess when I needed my mommy; even though I hadn’t really had that to begin with, it surely wouldn’t be an option after this night.

She asked, “Do you know the way home?”

After 14 years of me visiting her in Santa Fe, even living there briefly myself, she would periodically ask if I needed directions when I would go out. She knew that I had managed to explore the city alone, meeting new people with each visit, and in many ways she had even lived vicariously through me. She wanted me to know that she was prepared and able to take care of me, even though I finally didn’t need her to. Maybe there’s nothing to read into here; maybe she literally wanted to make sure I made it home OK, but she hadn’t asked me any of the other nights that I left her side on this visit.

We said our I love yous and off I went, as if it were just another night. 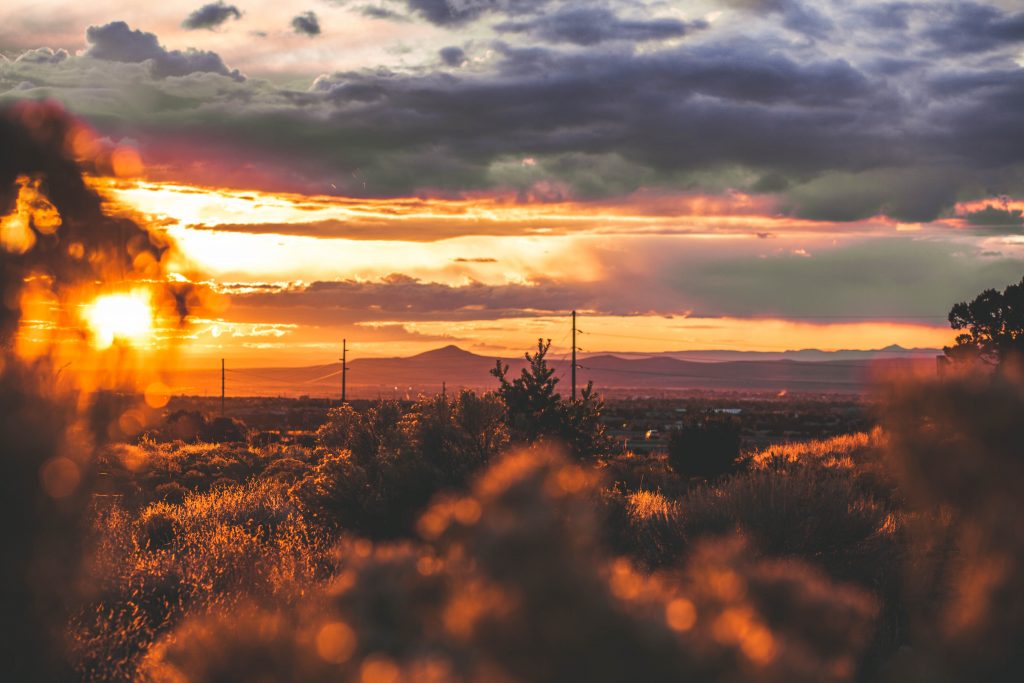