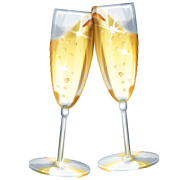 It’s New Year’s Eve. Growing up, I stayed up till midnight with girlfriends and watched in anticipation as the Times Square ball dropped, proclaiming the arrival of the new year. We’d scream and shout. There were noise makers and lots of jumping on the bed/couch/into the pool fully clothed. I imagined that as an adult, this would be a very glamorous evening. The ladies would don sequins and red lipstick. Everyone would sip champagne. There would always be someone to kiss at midnight. Sparkling confetti would be thrown at the stroke of twelve and a twinkling city skyline would lay just outside the window. I thought that a big, beautiful, disco ball hovered over New York City, the official city of Christmas and New Year’s to my 10-year-old self.

I have had my share of fun New Year’s Eves, but I can’t recall a night that quite lived up to those expectations. Many times, the evening has had so much pressure put upon it, by myself and others, that it ended up being a dud. The problem with my town is that no one wants to drink and drive (reasonably) and no one is willing to throw a shindig at their house. I remember at least two years in which Joe and I got dressed up and went out to a local pub, just so that we wouldn’t be sitting home, only to find it empty and silent at midnight. There are restaurants hosting “parties”, but attending would only lead to spending too much money and not knowing anyone there. This leads me to my plans for tonight: We’re staying home.

Being a Leo with the aforementioned penchant for glam, the idea of sitting home on New Year’s Eve should give me hives. In this case, going out would be a waste of makeup, to say the least. I was spoiled for Christmas this year, which might have something to do with why I’m at peace with staying in (I also happen to have a mild cold, but that’s no match for my desire to ring in 2011 on a high note). Our daughter is over at her grandparents. My husband used to be a chef for some very high end restaurants, so I decided to put him to work again in our kitchen. The plan is to have a nice meal, watch a movie, crack open the champagne and return to my childhood of watching the ball drop from my couch, imagining the fabulous evenings to come when I grow up.

In truth, I have had a New York City New Year’s Eve. It took shape in Queens rather than Manhattan. There was no skyline, no confetti and no sparkle. The reality is that my best friend made it an amazing evening, not my dingy surroundings or drunken boyfriend. Again, last year I had a city New Year’s with her (this time in Atlanta) and it was equally fun. No amount of dress up and setting can make the night fantastic; it’s the people you bring with you. This is another reminder of how wonderful my friends are with each passing year and that it’s OK that distance prevents us from visiting. Quality not quantity.

If what you do on New Year’s Eve predicts your entire year, I would say 2011 will be peaceful for me. It will be a year of optimism, as I can look at these mundane plans and see the silver lining. I haven’t let anything break my stride yet, so the year is looking good.

I leave you with this little Party Monster of a kitten that I found in clip art…Here’s to oh-11! 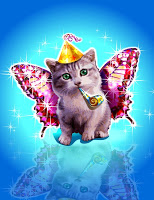